La Compagnie: Business Class Bargain If You're Going Its Way
THURSDAY, JULY 28, 2022 -- I'm not a business traveler. I just play one on this Web site from time to time.

In fact, I was 60 years old before I flew up front in business class on an international trip. Now I have another five years, and as many business class roundtrips, under my belt, all but the most recent in ultra-comfy, widebody, all-aisle-access seat configurations. I've been lucky that way.

But it is the most recent trip that brings us together today. My wife Joan and I recently returned from a three-week trip to Italy, instigated by a friend's insistence that we avail ourselves of a super-duper fare sale on the all-business-class French carrier La Compagnie.

Our fare whisperer was spot on: I paid just $1,400 each for roundtrip nonstops from Newark to Milan's Malpensa Airport. Sacré bleu!

"Now that you've experienced some good business class service it'll be valuable to get your input on La Compagnie," said my whisperer when pitching this value-airline play. "It won't be the same as the other carriers you've flown, but then neither is the price.

"Besides," he added, "you got something better to do than knock around Italy for a couple weeks?"

To paraphrase the renowned existential philosopher Curly Howard, "I kept trying to think of sumthin' better to do, but nothing happened."

So off to Newark Liberty we went.

Unfortunately, we went too early.

La Compagnie does not permit check-ins prior to 2 1/2 hours before flight time and we and our luggage arrived from Maine 40 minutes sooner than that. La Compagnie's agents were manning the counter all right; they just couldn't check us in before the appointed hour and thus turned us and our bags away. This prompted a trip to the nearby food court where one pint of beer and one glass of cheap wine set us back $35.50.

After check-in--it went simply enough--La Compagnie customers use the Virgin Atlantic Clubhouse at Newark, so that's where we headed to cool our heels before departure. The well-worn lounge could use a renovation, but the food and drinks--which you order through a QR code on your phone--were good. My kale salad was as good or better than any I've had in a restaurant. The service was also prompt and friendly. 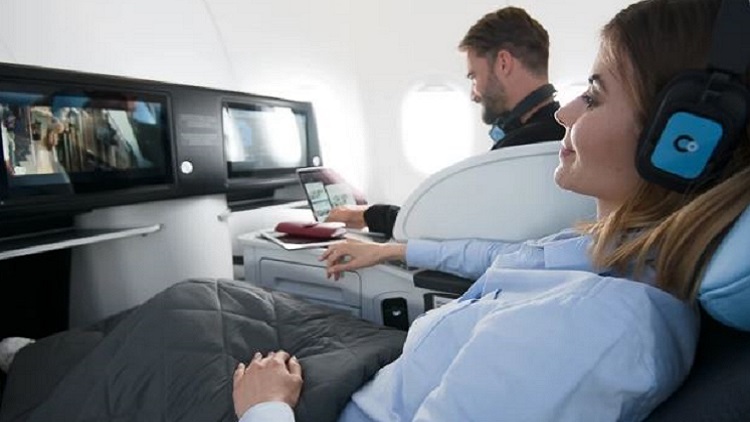 Boarding La Compagnie's narrowbody Airbus A321neo went smoothly. After all, the single-aisle aircraft only seats a maximum of 76 flyers. The handsome seats are configured 2x2. That means window dwellers do not have direct aisle access. This may be a critical rub for a true road warrior traveling solo as a horizontal aisle seat will require not entirely welcome interaction with the person sitting (or lying) at the window next to you. That's why other carriers have moved to staggered configurations to accommodate direct-aisle access for all business class seats.

While we're on the subject of the downsides, modest though they may be: La Compagnie doesn't offer daily service to Milan or Nice, the other routes that complement its flagship Newark-Paris/Orly run. Some flexibility in travel plans may be necessary. An example: Our original return flight from Milan was canceled, requiring us to scramble hotel accommodations to accommodate La Compagnie's less-than-daily and somewhat erratic schedules.

Further, if the convenience of travel apps and E-mail prompts are important to you, reconsider La Compagnie. It doesn't have an app, nor does it send out E-mails in advance with a link to online check-in. I don't consider this a big deal, but I thought I'd mention the lack of 21st-century digital amenities.

Now for La Compagnie's far more abundant upsides: Despite the 2x2 configuration and the need for window-side passengers to step over aisle flyers, the lie-flat seats are very comfortable. The in-flight dining is above average. The flight crews are excellent. Most importantly, even without the basically half-off fare I scored during a promotion, La Compagnie is priced right. I searched nonstop business class from New York to Milan, on various dates, and, at around $2,800 roundtrip, La Compagnie beat competitors by substantial amounts.

The overnight flight to Malpensa worked out just as I had hoped. Both of us got horizontal in a hurry and slept pretty much the entire way. The pillow/blanket combo was the best I've experienced on an aircraft. To my eye, the pillows appeared oversized. Blankets were quilted and substantial, not at all like the thin coverings offered by most other airlines. We slept through the dinner service, but the quiche served for breakfast prior to landing in Milan was tasty.

Our afternoon flight back to Newark started with a stop at Malpensa's common-use Sala Montale in Terminal 1. Except for Emirates Airline, all other Terminal 1 carriers use this lounge to accommodate premium-class passengers and it was packed to capacity, of course.

The daylight flight allowed me to observe the entirety of La Compagnie's onboard service. And there's mostly good news to report on that front.

The WiFi is free, a very nice thing indeed. Better yet, it worked well the few times that I used it to go online. La Compagnie's in-flight entertainment choices aren't as robust as other transatlantic airlines, however. There's plenty of music plus a Meditation Channel "to take care of your body and mind while crossing the Atlantic." And there are 62 movies from which to choose, probably fine for many flyers. However, there aren't any news channels, sports programming or TV shows to screen. I mark that as a slight negative, but, remember: free and serviceable WiFi!

Food and beverage service was quite satisfying--and not a plastic cup or utensil in sight. Wine choices included two reds and two whites, both French and Italian. (A Crozes-Hermitage I sampled was very nice.) Our meals, served on white tablecloths and in four courses, were tasty. I ordered the sausage stew with polenta and spinach, my wife chose the grilled salmon with bieta (chard), potato fondue and caponata. One other small thing: Instead of peanuts, pretzels or mixed nuts, we were offered cashews as a snack along the way. Cashews!

In both directions, we were impressed by the flight attendants working the cabin, too. There are only three of them, but nothing that I witnessed suggested that another might be required. Remember, the entire passenger roster is limited to just 76 flyers.

Bottom line: Would we fly La Compagnie again? Absolutely. As long we were traveling to Paris or Nice or Milan--and our fare whisperer says that the price is right.

SOME ADDITIONAL NOTES
Now in its eighth year of operation, La Compagnie flies only Airbus A321neos aircraft and has retired the aging Boeing 757s it used during its start-up. ... The route network, such as it is, continues to focus on daily Newark-Orly flights. The Milan and Nice runs are seasonal and/or operated only several times a week. A Newark-London/Luton route lasted only a few months in 2016. And the carrier announced, but has never launched, nonstop flights between Newark and Tel Aviv. ... I drove from Maine to Newark to hook up with La Compagnie and you'll have to self-connect at EWR if you want to sample the carrier. It has no interlining or code-share agreements. ... Other JoeSentMe members have a positive view of La Compagnie, too. A New Jersey-based member touted "having dinner in the [Virgin] club before we got on the plane. We were able to go flat bed a lot earlier than had it been on another airline." He also found flying into and out of Paris/Orly "worth its weight in gold" compared to using Paris/CDG. ... A Raleigh-based JoeSentMe member's concise review: "The only downside" of La Compagnie "was having to fly United Airlines to and from Newark."