First Time in Business Class: No Stress and Some Sleep

THURSDAY, DECEMBER 5, 2019 -- The first thing you notice is the stress. There isn't any. That alone may be worth the nearly $4,000 price for a business class ticket.

Normally just the thought of getting from my home in Maine to Boston and then on to Tokyo--a 6,600-mile-plus, daylong odyssey--would consume me with apprehension and dread. Weeks before such a journey even begins.

And yet there was nothing but calm. Glorious, stress-free calm.

"You must be dreading being on a plane for 13 hours," a friend remarked a day or so before my trip.

This friend knows well my aversion to long-haul air travel and so my response was as shocking to him as it was to me.

"Believe it or not," I said, "I'm almost looking forward to it." 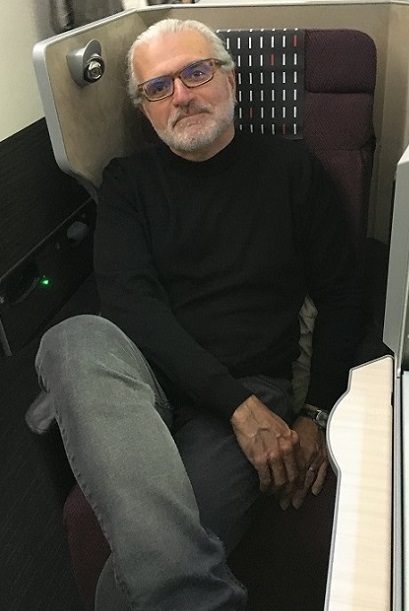 What took me so long?

For starters, I don't belong upfront. The cabin, I always assumed, is for business travelers--and that I am not. There has never been an instance where my presence was required at an event or a meeting in London or Hong Kong or Sydney or anywhere else. No one ever depended on me to deplane after a flight alert and ready to engage in commerce. (Well, my wife has, but that's only because she needs me to score some currency at the airport ATM, which I'm pretty sure does not count as actual commerce.)

In other words, travel expenses are always on our dime. And as we all know, business class fares can eat through a budget pretty quickly.

Besides, if you are careful about choosing the right airline--think Norwegian or Air France--premium economy can be comfy enough at a fraction of the price of business class. That is surely true for the majority of travel that my wife and I do, to European destinations mostly, where in-flight times can be as little as six or so hours.

Springing for eight large on a pair of business class tickets from Boston/Logan to Tokyo/Narita wasn't even my idea. It was my wife's clever way of easing my resistance to a very long journey that I had been reluctant to make. (By the way, we got our tickets at that good price thanks to the Joe Sent Me member discount from Cook Travel.)

Speaking of Joe--the person, not the Web site--the man has harangued me about sampling business class for years now.

Now, finally, I have done it. I have coasted to the check-in counter, seen my luggage tagged "priority," relaxed inside upgraded airport lounges and enjoyed all the other perks that business class provides--including, and perhaps best of all, an ability to go full horizontal while in-flight.

So far as I can tell, Japan Airlines does a very nice job indeed. Flight attendants in both directions were top-notch, paying close attention to the needs of everybody within my field of vision. Near the end of the flight to Narita one even came by my seat just to ask how I had enjoyed the flight. Another referred to me by name, though I had not myself provided it to her.

The food was by far the best I've had on any airplane--or even in any airport. I had not sampled upfront dining before, of course, but I know a good food service operation when I see one. And JAL runs a good one. My wife and I made sure to sample both the Western and Japanese menus in both directions. None disappointed. A wagyu beef sirloin steak was tender, full of flavor and served, for the most part, rare. A snack of grilled mackerel and gorgeously packaged rice was something I'd gladly pay real money for at a restaurant. A bowl of udon just prior to landing at Narita was well-prepared, comforting and satisfying. Even the bread service was a solid effort--and I am very particular about my bread.

As for the accommodations, what can I say about the JAL Boeing 787 Dreamliners that you don't know? Both my wife and I were over the moon with our little window-and-aisle-seat cocoon. In the full upright position, the seats were enormously comfortable and roomy. But the real test was when the cabin lights dimmed and we went horizontal for the first time in the air.

Newsflash: She had a good eight hours of sleep in both directions. I wasn't as lucky. But then, I'd never slept on an airplane before. Literally, never. So I gladly took the four hours of unconsciousness on the way out and the six on the way back. Make that very gladly.

And here's something else I never would have believed possible. After 13 hours in the air I didn't feel a bit weary. Our business class cocoon had saved us from all of that.

Hallelujah brother and pass the sake!

Still, none of JAL's swell service and accommodations--not the handsome pajama top and comfy slippers or the futon top that went over an already comfortable seat--were what made traveling business class truly special to me.

For that I must go back to my original point: It's about the near total lack of stress, stupid.

I'm still dumbstruck by it all, really. It's not as if JAL sent a limo to my house, drove my wife and me the two hours to Logan and deposited us to the gate with ample time to spare (and a couple thousand yen in pocket money). We started our trip with an Uber to the Portland bus station, where we boarded the Concord Coach Lines airport express. That makes three forms of transportation to negotiate, which under normal circumstances--no, make that all circumstances--gives me the worst kind of agita.

Apparently, however, the mere fact that I was holding a business class ticket made all the difference. Knowing that every other step along the long way to Japan would be deliberately designed for our comfort lifted the crushing emotional weight of economy travel off of my shoulders--and did it for the entirety of a two-week journey.

That is what I would call money well spent.