Portable Music? Nope.
I'm Still a Vinyl Man.
THURSDAY, MARCH 26, 2020 -- I appreciate convenience as much as the next guy. Just not when it comes to music.

I'm a vinyl guy. As in, 12-inch-around long-playing analog phonograph records, better known by geezers like me as LPs. The sound quality of a well-made vinyl record simply cannot be beat.

I catch a lot of grief over my vinyl "enthusiasm." Especially from fellow music lovers who travel a great deal. Over the years, and quite understandably, these people have grown ever more accustomed to digitization. How could they not? Each advance in technology provides greater portability in sound. Greater portability means having far greater control of what music you take with you on the road.

"Every piece of music that I could ever want to listen to is right here," a road warrior friend said to me just the other day, tapping his smartphone proudly, if a bit obnoxiously. "I probably travel with more music in my pocket than you have in your entire collection at home."

I doubt that very much, but I get his point. Loud and clear. Although I do note that his all-digital life now is a double whammy of despair: He's not traveling and his music still sounds crappy.

I will admit that there is nothing easy--or even close to convenient--about being a vinyl guy. First and foremost, I cannot listen to my music on a plane or a train or in a hotel or, well, anyplace except my own living room. For maximum-quality listening pleasure I must also sit in one place and one place only, a sofa positioned directly across from two floor speakers, at a distance of approximately seven feet. If that doesn't sound inconvenient enough, try getting up from the sofa every 20 minutes or so to flip a record from Side A to Side B.

Portability? Don't make me laugh. The very fine Linn turntable that I purchased in the early 1990s hasn't moved--ever!--from the living-room location where I first set it down and plugged it in. 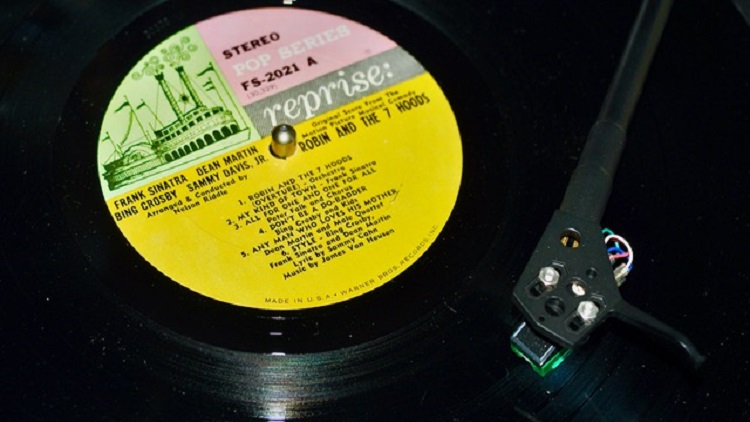 Vinyl people are, I will agree, a touch to the wrong side of reasonable. Just last month, and for reasons that I cannot explain or defend, I got it in my head that I must—must!—own the original soundtrack to the 1964 movie Robin and the 7 Hoods starring Frank Sinatra, Dean Martin, Bing Crosby and Sammy Davis Jr. It is an oddball movie, to be sure, but Nelson Riddle arranged and conducted the soundtrack, which just happens to be the work of the legendary songwriting team of Sammy Cahn and Jimmy Van Heusen. I mean, why not have it in my collection? Who's it gonna hurt?

Lo and behold, I discovered a very nice couple in Honolulu who had a near-pristine copy of the original vinyl LP. Best of all, they were willing to sell it to me for a mere $20, shipping included. It took more than three weeks to work its way through the United States Postal Service delivery system, but so what. I wasn't exactly in a hurry.

Buying LPs can actually be a real pain in the ass--and not just because "record stores" long ago went the way of the Eastern Buffalo--or your neighborhood Blockbuster. I have to source the majority of my new and used LPs from a crazy patchwork of individual collectors and entrepreneurs scattered throughout the world.

But finding these people online is actually the easy part. Figuring out which LPs to buy is a whole other thing.

These days, you must pay careful attention to where and by whom the vinyl is pressed. That's because vinyl records aren't all alike. Far from it. The quality of both the recordings and pressings varies wildly. You need to do your homework before buying a record if you care about how it sounds--and isn't that the whole point of the exercise?

Before the energy crisis of the 1970s--yes, I said the 70s--vinyl LP manufacturing was largely top-notch. It changed when petroleum, a key ingredient in making vinyl, got expensive. Record manufacturers began cranking out thinner, lower quality LPs. Many stopped using "virgin" vinyl at all, opting instead to add recycled scraps to the product This allowed them to cut costs--and product quality--even further.

I won't bore you with a history lesson, but suffice to say the vinyl LP world was never the same after the first global energy shock. By the time the compact disc showed up in the 1980s, vinyl was on its way to irrelevancy. And no matter how many rah-rah-rah stories you may read about the medium making a big comeback all of a sudden, don't you believe it. Hell, I've been reading "Vinyl is back, baby!" stories since the 1990s.

Still, now that you're not traveling for a while, maybe it's a good time to dust off that turntable and give your records a spin. If you still have a turntable and records to spin them on, that is.