Who's on YouTube? Abbott, Costello, Jeannie and More
SUNDAY, MAY 3, 2020 -- There was no bingeing TV shows when we were coming up. You waited for the next episode of a series to be broadcast. Like you're supposed to. Like they used to make them. All TV was free, too.

Turns out that, if nothing else, a lot of our old favorites are still free. And thanks to YouTube, which also is a mighty repository of great, free movies, you can binge to your heart's content. After all, us old, lock-downed dogs should be able to learn a few tricks.

Here's a small sample of what I've found on YouTube lately. You can almost certainly find additional episodes linked to these. Binge away. No one will hold it against you now. 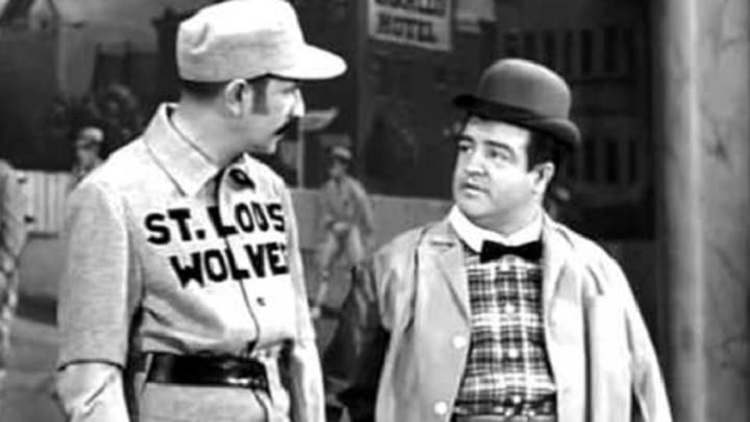 ABBOTT & COSTELLO SHOW
If you grew up watching the show that inspired Seinfeld--on your black and white TV, of course--now might be a good time to tune in again. This link takes you to the first episode, aired in December, 1952. Watch for the Jonah and the Whale routine at the on-stage beginning. Fun fact: Costello owned the show. Abbott worked on salary.

WHAT'S MY LINE?
From famed producers Mark Goodson and Bill Todman, this iconic celebrity-panel game show debuted in 1950 and ran until 1967. You may recall that shows ended with the panel donning blindfolds when the mystery guest appeared. In this 1965 show, the mystery guests are ventriloquist Edgar Bergen and his then-unknown young daughter, Candice.

IT'S ABOUT TIME
Gilligan's Island creator Sherwood Schwartz didn't have the same success with this show about time-traveling astronauts who land in prehistoric times. Only 26 episodes aired in 1966 and 1967. But, c'mon, how could you not want to watch Imogene Coca and Joe E. Ross as wise-cracking cave dwellers? This links you to the pilot episode. If some sets and music seem familiar, that's because Schwartz borrowed them from a show about castaways on a deserted island.

YOU BET YOUR LIFE
Master ad-libber Groucho Marx reluctantly signed on to do the show's radio version during a lull in his movie career. It became a smash hit, of course, lasting a combined 529 episodes between its radio and television iterations. In this 1955 episode, smart aleck-in-chief Groucho is rolled by one Dr. Giovanni, "the world's greatest pickpocket."

THE MARY TYLER MOORE SHOW
An awful lot of great comedy came out of this show's seven-season, 168-episode run. Many are online and free to binge. Here's "Chuckles Bites the Dust," an especially beloved--not to mention hysterical--episode. Click. Laugh. Then click some more for other episodes. What, you're too busy doing other stuff?

MUTUAL OF OMAHA'S WILD KINGDOM
Okay, so it's no Blue Planet, the BBC extravaganza. But this is probably the first wildlife/nature show that many of us ever laid eyes on. Would it kill you to revisit an episode or two? Starring zoologist and host Marlin Perkins and sidekick Jim Fowler, the show had a long run, airing from 1963 to 1988. Fowler took over as host in 1985 when Perkins became too ill to go on. He died of cancer in 1986.

I DREAM OF JEANNIE
This is the pilot episode from 1965 and it's a must-see if you're inclined to dig deeper into the 5-season, 139-episode series. Who remembers that astronaut Tony Nelson was about to be married before Jeannie got uncorked? (It was never mentioned again.) Or that 2,000-year-old Jeannie didn't speak English for the first few minutes of the show?

ONE STEP BEYOND
John Newland not only hosted these 30-minute dramas about paranormal events, he also directed all 96 episodes. Often compared to Rod Serling's The Twilight Zone, the Newland anthology actually debuted nine months earlier. This episode is titled "The Visitor" and stars Joan Fontaine and Warren Beatty. It's a solid, often overlooked series.

ALL IN THE FAMILY
Norman Lear and Bud Yorkin's groundbreaking sitcom was the first TV series to top the Nielsen ratings for five consecutive years (1971-1976). The show ran for nine seasons and more than 200 episodes. This one is among the best-loved. It's called "Sammy's Visit" and features Sammy Davis Jr. as himself. It is a priceless piece of racial comedy.

THE DATING GAME
Before crazy Chuck Barris got famous hosting The Gong Show he merely created and produced wacky game shows. The Dating Game was his first, in 1965, followed by The Newlywed Game a year later. This episode showcases Burt Reynolds as Bachelor No. 2. He loses! But he does not go home empty-handed. Burt and his fellow losing lonely heart received a set of genuine jade cufflinks.

THE DEAN MARTIN SHOW
The crooner and Rat Pack member's variety show launched in the fall of 1965 and ran strong for nine years and 264 episodes. The first one offers guest-star power. There's Bob Newhart, Diahann Carroll, Joey Heatherton and Frank Sinatra. Accompanied, of course, by Les Brown and His Band of Renown. By the way, Dean Martin's first summer replacement show--Remember summer replacements?--went on to become Rowan and Martin's Laugh-In.

HEE-HAW
Keep your highbrow city slicker opinions to yourself. Running 26 seasons and 655 episodes, something must be completely brilliant about this eccentric country variety show. Buck Owens and Roy Clark are the hosts, of course. In the 1973 show linked here the guest is Tennessee Ernie Ford.

TAXI
Do I really need to convince you to spend a little time clicking through some of these episodes? In five seasons the half-hour sitcom racked up 31 Emmy nominations. It won 18 of them, including three for Outstanding Comedy Series. James L. Brooks (of The Mary Tyler Moore Show and The Simpsons fame) co-created it. In this episode, Alex (Judd Hirsch) falls in love with Elaine (Marilu Henner) on a platonic trip to Europe. What more can I say?