An Airport Away From
The Team of My Dreams

They were both Mets fans, and the hopelessness of that passion created a bond between them.
— Paul Auster, City of Glass

SUNDAY, MAY 24, 2020 -- On October 17, 1986, in the early afternoon Rome time, I was queued up at the Alitalia check-in counter at Fiumicino Airport. Beside me was my newish wife Joan, in front of me a stocky man wearing a bright blue hoodie and jittering about in a highly agitated state.

"Let's hang back a couple steps," I whispered into my wife's ear. "Give that guy a little space."

I do not recall the exact circumstances of the delays that day, only that they were many, as is often the case with Alitalia. Yet it was a minor inconvenience since neither of us was in a hurry to leave Italy and return to New York.

Not so for Hoodie. Anxious does not begin to describe the man's position on catching the next flight to Kennedy Airport.

"C'mon man, let's get going," he pleaded to no one in particular. "If I don't get to see my Mets in the World Series tomorrow I'm gonna kill somebody, swear to God I will."

This is precisely the moment that my opinion of our animated fellow traveler changed entirely.

"Excuse me," I said, moving closer to the man. "Did you just say the Mets are in the Series?"

As soon as he turned around I had my answer. On the front of his blue hoodie was the very familiar (to me anyway) and very orange New York Mets logo. 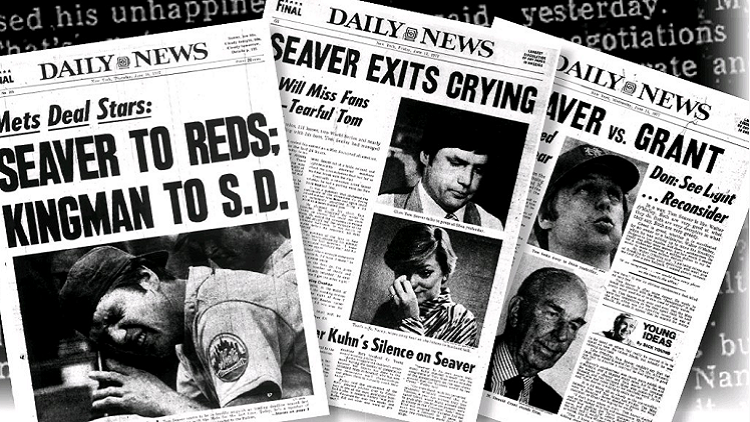 "Are you kidding me?" cried Hoodie. "Them and Boston, yeah. I'm from Jersey. Paterson. You?"

I have never in my life so desperately wanted to lie about my residence, far closer to the Mets home stadium than Hoodie's. Worse, the Mets were my father's, my brothers' and, therefore, my team. Forever. And always. Their 1969 World Series championship--a bona fide Act of God miracle--ranks among my most treasured memories.

Now I would have to explain to a total stranger how, for the recent few years anyway, baseball had occupied not a single square yard in the fabric of my life. I had remained completely and utterly clueless about my team's accomplishment!

"Brooklyn," I answered sheepishly--and softly enough so that nobody but I could hear.

Only inches now separated the man and me. I was trapped. My baseball demons had traveled across an ocean in order to torment me. Their chosen human vessel? An overweight, balding, hoodied New York Mets fan from Paterson, New Jersey.

"Brooklyn," I finally repeated, loudly and properly this time. "Born and raised."

Hoodie's eyes opened wider than a Boeing 747, but before he could scold or clock me--either response would have been justifiable--I spoke up in my own defense.

This evoked quite an appropriate response--if you are familiar with New York Mets baseball, that is.

"Darkest day ever!" Hoodie yelled, startling an elderly Italian couple ahead of him in line. "Seaver was God, the best. They should have executed the scumbag that traded him. Firing squad. No, guillotine. Bring me the head of M. Donald Grant!"

It was Grant, minority owner and team chairman, who had sent Tom Seaver packing in 1977, just ten years into a Hall of Fame career that lasted twice that long. Seaver was, and is, the greatest pitcher in Mets history. He isn't still called The Franchise for nothing.

Grant's shocking decision to trade Seaver sent shockwaves not just through New York's five boroughs, but through all of Major League Baseball. It remains the worst move ever made by a team that to this day is best known for its ability to make all conceivable kinds of worst moves ever.

Only Mets fans of a certain age, like Hoodie and me, have suffered through all of the team's many indignities. We are brothers in this way. Lifelong, I suspect.

Hoodie's eyes went down to my shoes and then slowly--very slowly--worked their way up my entire body until we were again eye-to-eye. "Still, no excuse for not even knowing they made it to the Series," Hoodie declared. "Seriously, man. Seriously."

My new friend was right, of course. I had been wrong on so many levels and told him so. More than a few times, as it happens, what with the hours it took for our flight to make it out of Rome. Before we said our goodbyes, somewhere around JFK Customs, Hoodie grabbed me by the shoulders with both of his impressive hands.

I am not in the practice of taking advice from strangers, certainly not agitated ones who wear baseball hoodies when traveling abroad. In this case, however, I decided to make an exception.

Between October 18 and October 27, 1986, the New York Mets and the Boston Red Sox played a full best-of-seven series. I watched most every inning of every game, and when the last out was recorded--a strikeout in the top of the ninth at Shea Stadium--my Mets had won their second--and last--World Series title.

As it happens, Tom Seaver wore a Red Sox uniform in 1986, his last as a professional baseball player. A knee injury prevented the 42-year-old from pitching against the team that he had led to the 1969 World Series that I had watched with my father and my brothers.

I am forever grateful that Seaver did not end his career by taking the mound that October.

I could not--and would not--have rooted against him.

Even Hoodie would have to back me up on this.